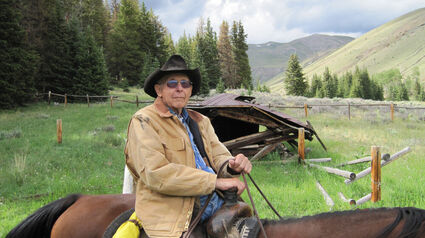 Carl Ernest Schweighart, 95, passed away on February 13, 2022 at his home in Worland with family by his side. Carl was born on September 27, 1926 at the Schweighart Homestead at Cottonwood Creek outside of Worland, WY. Carl was one of 11 children born to Charles and Wilhelmina Schweighart.

Carl attended grade school at the Schweighart school on Cottonwood Creek and graduated from Worland High School. He was drafted and served active duty in the Army from 1951-1954, and then served in the Army Reserves until his discharge in 1960. It was after his discharge that he married the love of his life, Patricia "Pat" Schweighart.

After working on the family homestead, Carl managed the L.U. Ranch for Dan and Martha Healy for over 30 years. He served on many boards including local, state, and National Wool Growers Association, Wyoming Livestock Board, and Wyoming Predatory Animal Board.

Carl is remembered as being a true stockman. One of his greatest honors was being inducted into the Wyoming Cowboy Hall of Fame.

He is preceded in death by his parents, Charles and Wilhelmina, brothers, Ed, Shorty, Fred, Butch and sisters, Sis, Dot, and Myrt, and infant twin siblings.

In lieu of flowers, please make donations to the Wyoming Cowboy Hall of Fame at P.O. Box 404 Saratoga, WY 82331. A memorial service will be held at a later date. Online condolences may be made to http://www.bryantfuneralhomeonline.com.