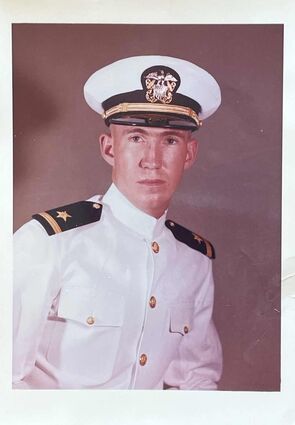 Donald Francis Wright SR., 83, passed away peacefully at home on March 7, 2022 with his son Willie, by his side.

Donald was born in Ajo, Arizona to Henry Leonard and Florence Neil (Jones) Wright on February 12, 1939.

Don grew up in the copper mining town of Bisbee, Arizona, and enjoyed a very active, outdoor-oriented childhood. He talked of many fishing trips with his father, uncles, and friends to the nearby White Mountains in Arizona. He also hunted deer, javelina, and a variety of birds in the area surrounding Bisbee. He graduated from Bisbee High School in 1957, lettering for the Pumas three times in baseball, and once in football.

After high school, he pursued a degree in engineering at the University of Arizona in Tucson, which he received in 1962.

In January 1963, Don enlisted in the U.S. Navy. He attended pre-flight school in Pensacola, FL, graduating number one in his class in June 1963. Given the option to fly in the aircraft of his choice, he elected to be a radar-intercept officer in the Phantom F-4J, the most advanced American fighter jet at the time.

From 1964 through 1966 he was deployed twice to the South China Sea. While there he amassed 205 carrier-based combat missions over North Vietnam, flying from the aircraft carriers “U.S.S. Coral Sea” and “U.S.S. Constellation.” After his combat deployments, he was assigned VX4, a fighter squadron that experimented and tested the capabilities of the Phantom F-4 aircraft.

While in the Navy, Don married fellow Naval Officer Katherine R. Wisniewski on July 29, 1967 in Erie, Pennsylvania. Their son Donald Jr. (Willie) was born in Port Hueneme, CA in 1968, and son, Michael was born in Riverton, Wyoming in 1971.

After being honorably discharged from the Navy in June of 1970, Don moved his young family to Riverton, Wyoming. There he worked as a mining engineer for several different companies mining uranium in the Gas Hills and Jeffrey City areas of central Wyoming. He worked in “the uranium patch” from 1970 through the final reclamation projects ending in 1994. He finished his career at U.S. Energy in Riverton from 1997-2000. After retiring, Don and Kathy relocated to Paonia, Colorado in 2004 to be near their grandson Donald III (Trey). Don remained in Paonia until relocating to Worland in August 2021, to live with his son, Willie.

Don was an avid outdoorsman and took great joy in all the opportunities Wyoming has to offer. His favorite outdoor activity was hunting, in which he always included the whole family. Like his father, Henry, before him, he became an expert marksman. Don harvested many antelope, deer, and elk while living in Wyoming and also enjoyed processing the meat himself. He even got Kathy into hunting, teaching her to become a fine marksperson in her own right, and helping her harvest her own animals.

Along with hunting, he very much enjoyed fly-fishing, camping, and backpacking.

As well as being a great supporter and participant of his two son’s activities, Don was very community and church-oriented. He was a member of the Knights of Columbus Catholic men’s organization, taught Hunter’s Safety for many years, and coached baseball at all levels.

Donald is preceded in death by his parents; his loving wife of 47 years Katherine, and brother Leonard.

Memorial services will be held 10:00 AM, Saturday, March 19, 2022 at St. Margaret’s Catholic Church in Riverton, Wyoming with Father Robert Rogers officiating. Graveside will follow at Mountain View Cemetery in Riverton. Memorial donations may be made to “Wounded Warrior Project.” Please send checks to PO Box 524 Worland, Wyoming 82401. Online condolences may be made at http://www.bryantfuneralhomeonline.com.