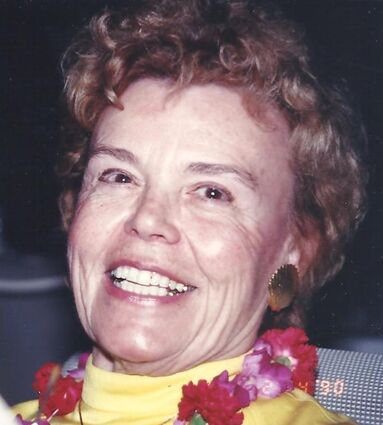 Frankie was born Frances Magdalene Vollman on March 15, 1927 in Owensboro, Kentucky. She was the middle child of seven born to Catherine and Carl Vollman, and she was the last survivor of that close-knit family. She attended Catholic school through high school graduation, then moved to Colorado Springs, Colorado to be near her sister. In Colorado Springs, she worked for the law book publishing company, Shepard's Citations, and rented a room in the historic Blecha home where she met a handsome, young banker, George Muirhead. Frankie and George began dating in 1955 and were amazed to discover that they shared the same birthday, March 15th. They married on March 15, 1956 and began a life together blessed by children, George Muirhead, Jr. (deceased), T. Chris (Dixie) Muirhead of Casper, Deborah G. (Michael) Kellam of Cheyenne, and J.F. Clay (Ann) Muirhead of Cheyenne.

Frankie and George moved to Worland, Wyoming in 1960 for George to continue the banking business started by his late father. Frankie loved Worland and its surrounding mountains, farms and ranches. She was the ultimate mother and grandmother, a wonderful cook, beautiful hostess, witty companion, and dedicated wife. She enjoyed traveling and golfing with family and friends, and hunting elk every season with George in the Big Horn Mountains.

Frankie and George moved to Colorado Springs in 1973, then returned to Wyoming in 1990 and enjoyed the remainder of their lives in Cheyenne. George died Christmas Eve, 2015, and was no-doubt waiting at Heaven's Gate to welcome mom.

Frankie is survived by her children, her much-loved grandchildren and great grandchildren. She was the rock solid, ever-shining light of our lives and extraordinarily beautiful inside and out.

Frankie deeply appreciated the wonderful staff and residents of Pointe Frontier, and the compassionate health care she received at CRMC and Davis Hospice Center. She was also thankful for Father August and Father Dominic in their spiritual guidance throughout her twilight years.

Frankie's life will be celebrated by morning Funeral Liturgy at 10:30 a.m. at St. Mary's Cathedral on her March 15th birthday.

Services are entrusted to Schrader, Aragon and Jacoby Funeral Home and condolences may be offered to the family on-line at http://www.schradercares.com.