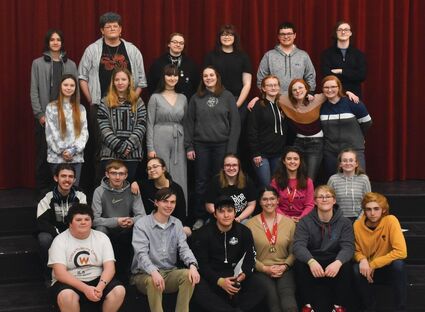 WORLAND – The Worland High School speech and debate team placed second in 3A at the State Meet in Riverton last weekend. Elizabeth Bleicher, Ten Sleep senior competing for Worland, earned the Wyoming 3A State Championship and the Overall Championship in Lincoln-Douglas Debate.

“We did so much better than expected,” said coach Rick Dorn. “There was only one point between second to third, third to fourth and fourth to fifth [place]. It was a real dogfight.”

According to Dorn, Riverton took first place, Lander took third, Star Valley took fourth and Powell took fifth. There were 13 3A schools, and 35 total schools in the competition.

Going to quarterfinals and earning fifth place in cross examination debate were Green and Nora Reid.

Advancing to finals in oratory and earning sixth place was Elizabeth Bleicher.