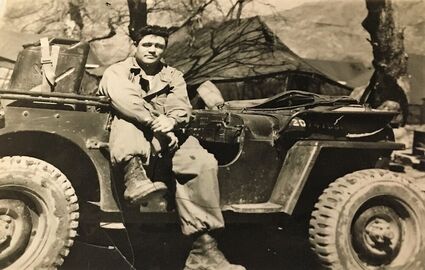 Raymond Sanchez, 95, passed away on March 3rd 2022 at Worland Healthcare and Rehabilitation. He was born on July 31st 1926 in Casper Wyoming to parents Irene Garcia and Ernesto Badillo. When he was about 10 years old, he moved to Worland where he would live most of his life. Raymond spent much of his early life working on farms and in the beet fields. At 17, he took a trip to Washington and actually worked for Boeing for about a month, before he got homesick and returned to Worland. He met Herminia Chavis, fell in love and married her. They were married from 1951 until 1960. He worked for a furniture store in Worland for some time and then the Korean War began. Raymond was serving in the National Guard when he was sent to Korea in about 1949. He would serve there as a gunner 1st class. He was honorably discharged April 6th 1952, having been awarded the Korean Service medal, w/2 Bronze Service Stars and a Distinguished Unit Citation. When he returned home, he started a family with Herminia having two sons. From the furniture store, he was offered a position at the local post office. He would work there as a clerk and as a mail carrier for the next 29 years.

Raymond is best known and remembered as a softball coach for the Worland Monarchs. He began his coaching career in the late 50's, coaching the Worland Squaws. Not long after reading about a baseball team from Kansas City, called the Monarchs, he changed the team's name. "Sanch," as almost anyone who was involved with softball knew him by that name. He coached about 40 years, finally stopping when he was in his early 80's. His teams had great success, winning more than 15 state championships in that time. At one point in the early 70's his teams won consecutive state championships from 1970 to 1976. He at times had as many as an A through F teams. Raymond was inducted into the Wyoming Sports, State Hall of Fame.

In the early 80's he was reintroduced to an old girlfriend, Victoria Villareal. They rekindled their romance from over 40 years earlier and married. They spent almost all of their time together (1981-2021). In his later years, he enjoyed traveling with his wife Victoria. They traveled across the United States to see her and his children. The lived off and on in Worland and in Yakima Washington. They settled in Worland in 1995 after Victoria retired. In 2015, due to health issues they returned to Yakima and made a home there. Upon the death of Victoria, Raymond returned to Worland as for him, this was home.

A Memorial Service will be held 1:00pm, Saturday, March 19th at the Veile Colonial Chapel. Graveside services with Military Honors will follow at Riverview Memorial Gardens. Arrangements have been entrusted to Veile Mortuary.