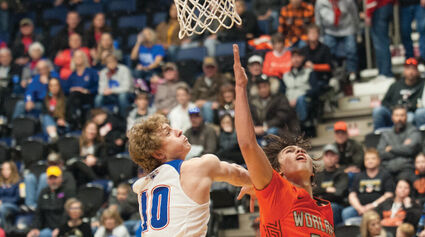 Warrior Court Gonsalez gets a shot off over Bearcat Jackson Hughes during the 3A State quarterfinals vs. Douglas at the Ford Wyoming Center in Casper on March 10.

WORLAND - It was not the hardware they were after, but the Worland Warriors showed their resolve and scrapped their way to two wins to finish fifth and bring home the consolation championship from the 3A State tournament in Casper on March 10-12.

A pair of upsets in the regional tournaments set up a showdown between the Warriors and Douglas Bearcats in the quarterfinals of the 3A State tourname...