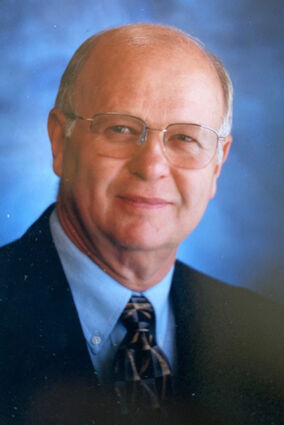 His family farmed for a short time in Nebraska before moving to Sterling, Colorado, where his family owned an agricultural retail business for many years. Ron grew up with horses and always had a love for them. Growing up, Ron and his sister, Jeanne, spent time with their animals and occasionally throwing chicken eggs at each other.

Ron worked for the bank in Worland for many years. They attended St. Luke's Lutheran Church. He was part of the Rotary Club and was very proud of the Festival of Trees fundraiser he helped organize. He enjoyed many afternoons roping and riding horses with Jamie

In 1999, Ron and Cathy moved to Billings, where he continued to work in mortgage lending.

He loved team roping and his horses. He spent many weekends at the WTRC ropings.

In April of 2004, his granddaughters, Kate and Emma, were born, and he spent the last 17 years loving and teaching them everything he knew. The girls gave him the name Popie. We are sure some people never knew his name as anything other than Popie.

In 2016, Ron was diagnosed with idiopathic pulmonary fibrosis. He spent the past six years going to pulmonary rehab and did whatever the doctors told him to do to prolong his life.

His family would like to thank his doctors, the therapists at pulmonary rehab, St. John's Hospice and Nurse Katie.

From Kate and Emma, "Thank you for being the best Popie we could ever ask for. Thank you for being a father figure in our life. We are so very grateful for everything you've done for us, from teaching us to ride a horse, to caring for animals, giving us a foundation of faith, being a positive role model, how to be a hard worker, and everything in between. 'I'll see you later honey, I love you.' We will see you later, Popie. We love you. You're with Jesus now."

Services will be at 11 a.m. Monday, April 4, at Trinity Lutheran Church, 537 Grand Ave., Billings. Luncheon to follow. Interment will be at Yellowstone National Cemetery, Laurel, at 2 p.m.

Condolences may be made at http://www.michelottisawyers.com.