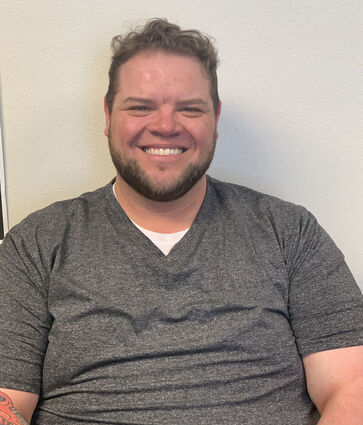 Last month for the mental health article I discussed men and depression and the stigma that often goes with men addressing this. This week, I am following up with one man who has been able to tackle that stigma.

Meet Jordan McKamey. Jordan is a long-time resident who was born in Worland. While growing up here, he was involved in various sports activities and school involvement. Overall, he was happy, however, Jordan began to experience depression in his late teens, "probably between 17 and 19." Jordan stated that he, "identified a lack of enjoyment in the things I was actively involved in or with friends that I was spending time with." It started out with a mild low, which he can now, in his adult years, identify as depression. Jordan described that he was "very isolated with my thoughts, especially when it came to emotions."

When Jordan went to college, he noticed that things seemed to get better. He had a new independence of being on his own, playing baseball, and experiencing some new social groups. However, his baseball career came to an abrupt end due to "not being ready to play college athletics." He experienced a lot of time on his hands which led to finding food as his comfort, something that he also struggled with in adolescence.

He states he was "isolating more and feeling a lack of self-worth," which led to depressive symptoms creeping back in. Jordan states that with the knowledge he has now, he is able to recognize that he experienced his first manic cycle. Jordan states, "I woke up with one or two days left before winter break came to a close, that I was going to change drastically." This "change" entailed, "I wanted to revamp my health, and that I was unhappy in my body. I wasn't challenging myself and I wanted to get healthy. Now I realize it went extreme, I went from everything I wanted to eat to paying attention to every single calorie I put in my body, to an extreme every day exercise routine."

Once coming home for the summer, things seemed to level off. However, when Jordan returned to college again, he moved off campus. Depression gradually crept in. He was more isolated from peer activities and he stopped attending classes. Alcohol use became more prevalent and comfort eating yet again reared its head. Looking back now, he can see that this was part of his cycle. He would make extreme decisions to "fix my life," and then "burn the candle at both ends until I burned out,"which would lead to a depressive cycle. "The ups never matched the length of the downs."

In 2018, after experiencing highs and lows for years, Jordan realized he needed counseling. He states, "I could no longer summon the effort to get off the couch and hide how I was feeling from myself anymore."

Since taking that first brave step, Jordan has been willing to accept the diagnosis of Bipolar II Disorder. He reports this diagnosis "provided so much clarity ... it answered so many unanswerable questions." He dug deep into his counseling and through the years he has gained the realization that he is worth it, he is worthy of healing, of having emotions, and of being heard.

He describes that, "there is a bloom period where you start to reap the benefits of all that you have gained and learned from that very first step". Without help, Jordan knows the cycles just repeat and "you end up destroying yourself all over again."

Jordan's recommendation for men struggling with depression is to "be braver than the voice in your head that you are not worth it, that it will be too hard, or that you are too broken. There is no low that you cannot come back from."

He wants men to realize that "the type of man that you learned that you had to be, is the man that you will have to leave behind if you want to find the authentic man that you are destined to create."

Jordan is a true warrior that breaks the stigma. Bravo!