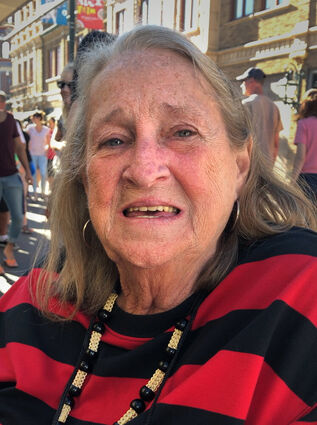 Annabelle "A.B." Word, 81, of Kirby, died April 27, 2022, at 05:39 in Casper Medical Center after battling a long illness at home. Her husband and collaborator of 28 years, Barrie Lynn Bryant, was holding her hand when she died. A.B. was born Aug. 3, 1940, in Little Rock, AR. She was preceded in death by her parents of Little Rock. She is survived by her husband, Barrie, three dogs, Peeka, Layla and Rumi, and two cats, Nellie and Grady of Kirby, her daughter, Jennifer Paige Spradley of Dallas, TX, and her son, Jay Scott Spradley (Annie) and their adult children, Summer and Tommy, of Rogers, AR.

A.B. moved to Wyoming from Little Rock Oct. 10, 1994, with her husband, Barrie. After a few days' drive around the Bighorn Basin, they found a vacant home in Kirby and moved in. The couple were already professional artists before moving to Wyoming.

At Kirby, A.B. and Barrie established Merglenn Studios, their fine art business, in 1995, and began depicting local western subjects. A.B. did the drawings and Barrie the frames. The couple traveled to western themed shows and made sales and won awards (Gold and Silver medals in Los Angeles). In 1997, A.B. 's painting of Donny Love featured on the RT Communications phone book cover, and in 1999, one of Kirk Tolman and his sheep featured on a different Bighorn Basin phone book cover. But in 1999, A.B. returned to her original love of creating fantasy and "imaginative realism." The couple soon entered a completely different art market.

A.B. gained international recognition in the World Fantasy, Horror, and Science Fiction market and through the esteemed Artist Alley at San Diego Comic Con. This market was big for artists who illustrate other people's stories, and A.B. just wanted to do her own thing. Seeking to support that better, the couple discovered the Mecca of outdoor art fairs in Florida and the South East US. From 2004 until 2015, they traveled to that region twice a year for a string of outdoor shows. The couple did very well there since the prize money was big (she won awards at 3 out of 4 shows) and the clientele were most receptive to A.B. 's whimsey. When A.B. developed serious respiratory problems in April 2015, the couple traveled less and closer to home.

A.B. has won more than 200 professional awards for her art and has received four Professional Development Grants from the Wyoming Arts Council. She was a highly creative artist's artist. She possessed a tremendous imagination and could tap into it at will. Please see AB's art website at merglennstudios.com.

A.B. is being cremated by Newcomer Funeral Home in Casper and Barrie will receive her ashes. She asked for no public services or memorials to be held.