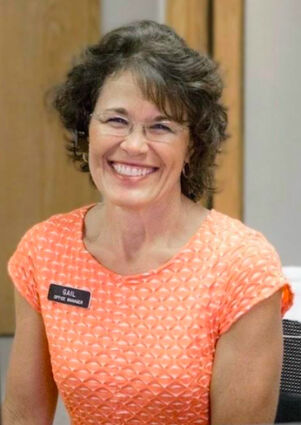 Gail Maria Klispie, 59, passed away in her home surrounded by family after a valiant 6-year battle with colon cancer on May 13, 2022.

She was born to Larry Gene and Rita Mae (Briscoe) Harrell on March 8, 1963, in Corydon, Indiana. She was the third of six children. Gail spent her youth growing in faith, developing love for the outdoors through exploration with siblings, playing in the river, climbing trees and horseback riding around their family farm. Her family made a cross-country relocation to move to Cody, Wyoming in 1970, and then on to Powell in 1973, where Gail spent her middle and high school years.

Gail graduated from Powell High School in 1981, having been active in the state Catholic Youth Organization. She graduated with an Associate's degree from Northwest College in 1983, instilling a love for journalism and capturing life through photography. She married Tom Crichton and moved to Worland the same year. She had her first child, Amanda, in 1985, and Mathew in 1986. She was a vivacious addition to this new community, joining softball and jumping into religion. She hit a home run during her first game after being drafted to a new team, and they knew they had to keep her, starting a long and fun softball legacy. Gail and Tom divorced, and Gail continued to live in Worland with Mandy and Mathew. Through her love of activity and softball, a friendship was forged with Gary in 1991. Gail and Gary married on December 27, 1992. Their union also brought Amber into their family. In the fall of 1993, Katelyn was born. Gail and Gary moved to their home on Charles Avenue, where they've poured love, time, and commitment for 29 years.

Gail embodied a zest for life, engaged in every morsel of her time. She loved recreational sports with friends in volleyball (including refereeing) and softball. She spent time at the lake, ocean, and in the mountains with Gary and her friends, and was constantly planning to explore new spaces around the country and world. She is known as a skier, walker, diver, paddleboarder, hiker, and adventurer - all with a vivacious smile on her face. In her 39 years in Worland, she had a variety of jobs in doctor's offices, communications, dental hygiene, and then her longest with Cloud Peak Chiropractic, from which she retired in 2020. Her desire and skills to organize, align, assist and advocate for others were valuable in these secretarial positions and to the people she served through the community. She organized and participated in Catholic youth events for many years and thrived in her faith within this Catholic community.

For Gail, family was everything. In her role as mother and wife, her commitments, energy, and greatest joys came from time spent together. She was a proponent of family dinners, game and movie nights, camping trips, and traveling to spend time with extended family all over the mountain west and on the gulf coast. She led in involvement and constant support of her family in activities of their interest and pouring out passion in celebrating hard work and achievements. Gail took great pride in raising active, involved children, instilling the moral fiber she stood for. She felt honored to have a partner like Gary to live and love beside.

Gail is known for her strength, energy, and thoughtfulness. She is known for hard work, and work done well. Gail was a force, with her active spirit and desire to do all things. She loved fiercely and was a woman of deep faith.

After she was diagnosed with colon cancer in 2016, her will and strength never faltered. Her battle with cancer did not define her; she had a tenacious desire to keep on, embodying great courage. Her advocacy for her time and her quality of days delivered her more memories, experiences, and new people to love over these last five years. She became a grandmother and watched all of her children find love in spouses that continued to grow her family. Gail passed away peacefully the morning of May 13, wrapped in love and fresh spring light, with her family around her, filled with blessings from friends. She is now able to live anew. She lives on in all who knew her.

Gail is preceded in death by her parents, Larry and Rita Harrell.

She is survived in death by her husband, Gary Klispie; brother, Paul (Pam) Harrell of Riverton, WY; sisters: Diana (Delos) Adams of Alpine, WY; Vicki Meyers of Vernal, UT; Traci Swarm of Billings, MT; and Carla Wesley of Billings; son, Mathew (Kerie) Crichton of Washington, D.C .; daughters: Mandy (Seth) Roseberry of Sheridan, WY, Katelyn (Bru) Swing of Sheridan and Amber (Martin) Harvey of St. Petersburg, FL; grandchildren: Orrin, Caleb, Addison and Hannah, as well as numerous nieces and nephews. Her deep friendships in the community brought her and Gary great joy in all walks of life, and they are truly grateful for the support and adventures.

A rosary will be held 7:00 PM, Friday, May 20, 2022 at St. Mary Magdalen's Catholic Church. Mass of the Christian Burial will be held 12:00 PM, Saturday, May 21, 2022 with Father Robert Rodgers officiating. A Celebration of Life service will start immediately afterwards. Memorials may be sent to The Hope Lodge in Salt Lake City. Please send checks to P.O. Box 524 Worland, WY 82401. Online condolences may be made at http://www.bryantfuneral