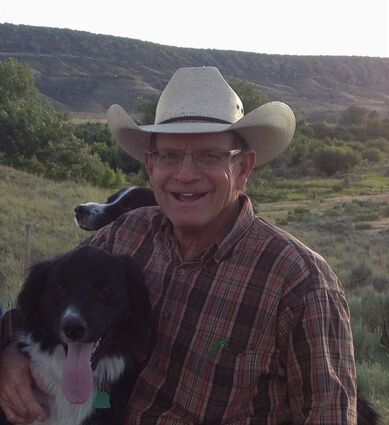 Mark Rice Stiffney, 69, passed away in his Ten Sleep home after a courageous battle with ALS on May 12, 2022.

Mark was born in Kendallville, Indiana to Robert Hague and Marilou (Rice) Stiffney on October 12, 1952.

He spent his childhood actively involved in Trinity United Methodist Church, youth group and as an Acolyte. His love for ranching started at a young age as he milked cows for neighboring dairies and got involved in the High School FFA program. He also enjoyed tennis and cross country throughout his high school years. Mark graduated from Albion Indiana High School in 1970 and pursued higher education in Tifton, Georgia at Abraham Baldwin Agriculture College. Upon graduating, he drove across the country to work on a ranch in Newcastle, Wyoming. This is where he met the love of his life, Betty Jo (Ogle). It didn't take long for him to know he wanted to spend forever with her. Mark proposed and they were married on June 20, 1976.

Over the next several years, Mark and Betty Jo traveled around the country working at various ranches from Creswell, North Carolina to Westby, Montana. In 1980, Mark's dream of owning his own ranch became a reality, and they put down roots in Ten Sleep, Wyoming. Once settled, they were blessed with two children, Christopher and Chad.

Throughout Mark's life, religion was always a key component. He welcomed the Lord in everything he did and was active in many churches. While living in Georgia, he was a part of Christian Missionary Alliance; in Montana, he spent his Sundays at the Evangelical Free Church, and finally, he found his forever church with Southern Baptist in Ten Sleep. In the early 2000's, Mark started the Men's Breakfast in Ten Sleep, a men's worship that still continues to this day.

Mark is preceded in death by his parents.

He is survived by his loving wife; brothers, Rick (Kathy) Stiffney and Kirk (Susan) Stiffney, both of Goshen, Indiana; sons, Christopher (Megan) Stiffney of Ten Sleep and Chad Stiffney of LaFayette, Indiana and one grandchild, Porter.

Cremation has taken place, and a celebration of life will be held 12:00 PM, Saturday, May 21, 2022 at Ten Sleep Park. Following the celebration, a BBQ will be served, and everyone is invited. Memorial donations may be made to Ten Sleep Senior Center or Ten Sleep Ambulance. Checks may be sent to PO Box 524 Worland, WY 82401. Online condolences may be made at http://www.bryantfuneralhomeonline.com.