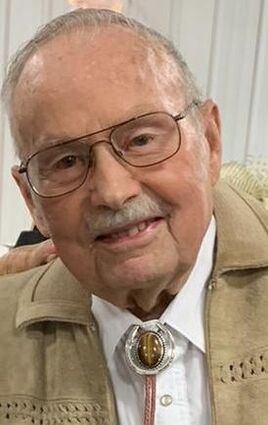 Gene LeRoy Schreibeis of Worland, Wyoming moved to his heavenly home on May 23,2022. He was born on May 20, 1929 in Buffalo, Wyoming to George and Violet Lupton Schreibeis.

Gene and his family moved to a farm/ranch north of Sheridan soon after he was a year old, where he remained until his marriage.

Gene graduated from Sheridan High School in 194 7. He was one of the original students at Sheridan College and then graduated with honors from the University of Wyoming in 1952.

Gene and Bonnie Reed were married in Sheridan at Immanuel Lutheran Church on September 4, 1949.

After graduation from the University of Wyoming Gene was Foreman at the Torrington Experimental Station and later went into Agriculture Finance, first with Farmers Home Administration in Wheatland and Powell and then with Wyoming Production Credit in Worland. Upon his retirement, he worked with his son in Rocky Mountain Reclamation, a surface land restoration company.

He has been an active member of the Lutheran Church-Missouri Synod in each town in which they lived. In Worland Gene and Bonnie owned an acreage where they raised hay, pasture, and beef.

Gene was preceded in death by a daughter, Christine; his parents; a brother Lloyd; and a sister Darleen. He is survived by his wife Bonnie; and his children Ronald (Valerie) Schreibeis; Teresa Neal; Sonya (Martin) Berg; Nina Nelson; and Yvonna (Doug) Shryack; 10 grandchildren; and 7 great grandchildren and a brother Norman (Cheryl) Schreibeis.

Services will be at 1 p.m. on Friday, May 27, at Immanuel Lutheran Church, Sheridan. A Celebration of Life will be held at St. Luke's Lutheran Church, Worland, at 6:30p.m. on Tuesday, May 31.

In Lieu of flowers, donations in Gene's name may be made to Lutheran Hour Ministries, 660 Mason Ridge Center Drive, St. Louis, MO 63141-85 57 or to the organization or charity of your choice.