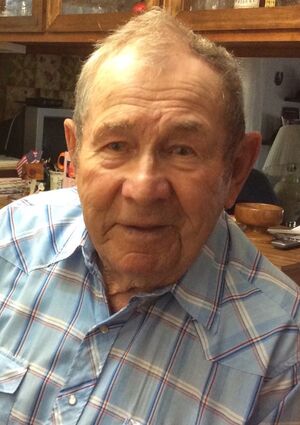 Edward "Ed" Peter Hausauer, 96, passed away surrounded by his family on May 28, 2022 at Hot Springs Health Center in Thermopolis, Wyoming.

He was born to Jacob and Emilie (Sommer) Hausauer in Dunn Center, North Dakota on July 13, 1925.

Ed attended school in Dunn Center and farmed with his father. He served in the U.S. Navy toward the end of WWII before returning to farming. On July 22, 1958, Ed married Vera Rehberg and they welcomed daughter, Carol, in 1959. Along with family members - father, Jack and brother, John - Ed purchased the Plaza Hotel in Thermopolis in 1959. The family owned and operated the Plaza for 30 years.

During that time, Ed took on several other jobs around the area including, helping Tosh Nakamura on his sugar beet farm, working in the sugar factory in Worland, and driving school bus. He especially enjoyed bus trips with the Wildcat Band.

After selling the Plaza in 1989, Ed and Vera remained in Thermopolis. Ed kept busy with his own lawn care business, working as maintenance man at the Super 8, and helping build St. Paul's Lutheran Church on Highway 20.

A man of faith, Ed was active in his church. He and Vera made many lifelong friends there. Ed was proud of being a veteran and was quite involved in the VFW, serving as officer of the day, participating in the Honor Guard, decorating graves, and putting up flags on holidays. A highlight for Ed was going to Washington, D.C. on a Wyoming Honor Flight in 2011. Ed enjoyed his time in the outdoors. He hunted elk and moose with many friends and especially enjoyed fishing in Wood River. In retirement, Ed was an avid exerciser who kept active by going to the gym and pool and by riding his stationary cycle. He always had a vegetable garden, but his apricot tree was his pride and joy. Restoring a 1955 Chevy pick-up also gave Ed lots of happiness and satisfaction.

Funeral services will be held 10:00 AM, Saturday, June 4, 2022 at St. Paul Lutheran Church in Thermopolis with Pastor Sam Needham officiating. A public visitation will be held one hour prior to services. Burial will follow at Monument Hill Cemetery. Memorial donations may be made to Thermopolis VFW #2281, Hot Springs County Senior Center, or St. Paul Lutheran Church. Please send checks to P.O. Box 524 Worland, Wyoming 82401. Online condolences may be made at http://www.bryantfuneralhomeon