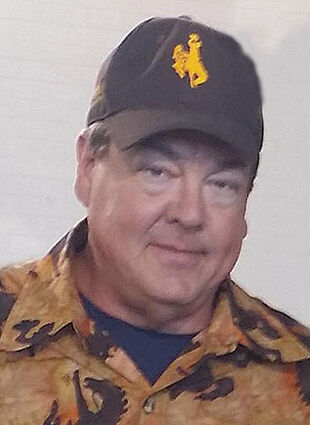 Frank Allen Dietz, 63, passed away peacefully at his home on May 27, 2022, after a courageous six year battle with Melanoma Cancer. Frank never lost hope, and bravely participated in many clinical trials in hopes of finding the one drug that would cure him. His family and friends would describe him as a kind, quiet, and gentle man with a huge heart, who also loved to tease.

Frank was born to Robert James and Dolores Ann (Frank) Dietz on January 5, 1959, in Worland, Wyoming. He completed elementary, middle, and high school in Worland, graduating in 1977. He had a passion for the game of football at an early age and played for the Worland Warriors. He also participated in track and basketball and enjoyed bowling. After high school, he earned an associate's degree in business from Northwest Community College in Powell.

During high school, he spent much of his time working at the family-owned business, Mel's OK Tire, with his dad and Uncle Mel. He continued working at the tire store, where he eventually became the owner. He loved bird hunting and participating in shooting sports with his friends. Frank loved to go camping and exploring in the mountains on 4-wheelers, and in his earlier years, went snow machining with his family. Frank also enjoyed playing recreational co-ed volleyball, which is where he met his future wife, Tori.

Frank married Tori Legerski on July 26, 1997 at St. Christopher's of the Big Horns. Both he and Tori shared a love for the mountains where many happy memories were made. They enjoyed camping with Tori's Mom, Victoria, and with friends and other family members. In the warmer months, Frank enjoyed cutting wood for their fireplace, ordering a semi load of logs every other year. Winter months were spent playing cards with friends, watching his Wyoming Cowboys and Green Bay Packers, attending Wyoming Cowboy games in Laramie, reloading shotgun shells, watching old western movies on TV, and he also perfected the art of horsehair hitching.

Frank was a member of the Worland Shooting Complex and also played an important part in the grant writing process to obtain funding for the five stand. He participated in sporting clays events and competed in all disciplines, receiving several awards and recognitions. Recently, Frank received the "Out of State Champion for Sporting Clays" award from the South Dakota State Sporting Clay Tournament. He was a member of the Worland ELKS Club, Washakie County Farm Bureau, the National Rifle Association and Zion Lutheran Church. He supported the local 4-H by purchasing a beef each year on behalf of Mel's OK Tire Store. Supporting the Worland community was very important to Frank.

Frank was blessed to have his two close friends, Lee and Gil, spend priceless time with him, sharing stories and laughter during the days before he went to heaven. He also enjoyed visits from countless other family and friends who continually popped in to visit during the past few months.

Frank was preceded in death by his parents, grandparents, Henry and Emma Frank, and special uncles Bruce Frank and Mel Dietz.

Cremation has taken place. A memorial service will be held at Zion Lutheran Church in Worland on June 18 at 11:00 A.M. Memorials can be made to the Washakie Hospital Foundation - Cancer Fund or to the Shriners Hospital. Please send checks to P.O. Box 524 Worland, WY 82401. Online condolences may be made at http://www.bryant