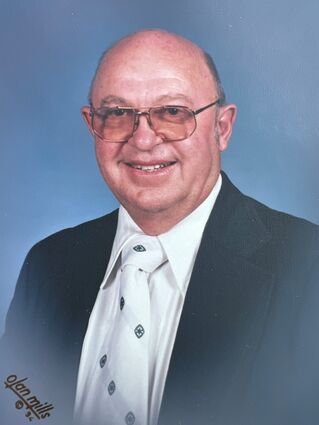 Ray was born in Lander, Wyoming on May 27, 1931 to Hazel (Clark) and Raymond Chapman. He graduated from Fremont County Vocational High School in Lander in May of 1949. Following high school, he attended Barnes Business College in Denver from September 1949 to December 1950.

Ray joined the Air Force January 1951 and served until October 1954. While in the Air Force, he attended Clerk Typist School at the University of Oklahoma in Norman, Oklahoma. He was stationed in Japan during the Korean War for 30 months serving as a bookkeeper for unappropriated funds on Base. While overseas, he attended La Salle Accounting Course by correspondence. Following his discharge, he started at the University of Wyoming in September 1954 and graduated in May 1957 with a Bachelor of Science in Accounting.

June of 1957, Ray secured a job as a Junior Accountant for Kenneth S. Barber CPA in Worland, Wyoming. Ray passed the CPA Exam in August 1960 after attending a special CPA Course at the University of Alabama in the fall of 1959. After Mr. Barber's death in May 1962, Ray purchased the CPA practice in Worland.

Ray was united in marriage to Betty Graham in Lander, June 14, 1955. The coupled made their home in Worland, raising three children. He was active in the Jaycees in Worland, acting as the Wyoming State Treasurer in 1964. Ray was also a member of the Worland Kiwanis Club, serving as President in 1969. He served on the Chamber of Commerce and was on the Worland School District #1 School Board for 4 years. Ray and Betty were active members of the United Methodist Church, where he served on the Circle J Ranch Board for 3 years, and he was a member of the Bell Choir at the church.

While in high school, he played trombone in the band and his family had a band that played dances in the Lander area. He enjoyed spending time with his family at the family ranch in Lander and the Graham Ranch located outside of Jeffrey City, Wyoming. Playing card games and cribbage filled his later years along with puzzles. At the family home on Culbertson Avenue, he enjoyed gardening.

Visitation will be at Bryant Funeral Home 6:30 to 8:00 pm June 1, 2022 with family present. Graveside services will be held at Riverview Memorial Gardens Cemetery in Worland, 11:00 am June 2, 2022. Military honors will be provided by the US Air Force and American Legion Post #44.