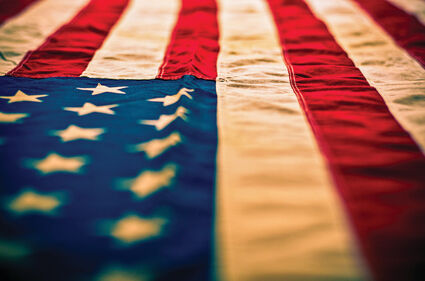 The American flag is a symbol of the country's history, pride and success in overcoming political oppression. Through its many incarnations and variations, the Stars and Stripes has waved over government buildings, schools and private residences.

According to History.com, in 1775, the Second Continental Army led to the creation of the first "American" flag. However, that flag was too similar to the British Union Jack flag, George Washington requested a revision. In 1777, the Second Continental Congress passed a resolution stating that the "flag of the United States be 13 stripes, alternate red and white." Furthermore, the "union" was represented by 13 stars of white in a blue field, "representing a new constellation."

More than a century later, a small-town Wisconsin teacher named Bernard Cigrand came up with the idea for an annual flag day in 1885. Even though the Fourth of July, a holiday in which the flag is prominently and proudly displayed, had long been celebrated as the birthday of the United States, Cigrand wanted a holiday that would focus specifically on the flag in all its glory. June 14 was selected because it marked the anniversary of the official adoption of the first flag. Cigrand led his school in the first formal observance of the holiday, and throughout his life continued to advocate for respect of the flag.

Various other organizations liked the idea of a day to honor the flag, including the State Board of Education of New York, the Betsy Ross House and the New York Society of the Sons of the Revolution. Yet, it wasn't until May 30, 1916, that Flag Day was officially established by presidential proclamation by President Woodrow Wilson. Still, it would take another 33 years for President Truman to sign an Act of Congress designating June 14 as the official National Flag Day, which he did on August 3, 1949.

Americans can honor the flag by displaying it on Flag Day. Here's how to display the flag properly, courtesy of Military.com.

--The flag should be free of any obstructions, such as power lines or tree limbs.

--If displayed with other flags, Old Glory should be at the top-most point or in the center of a horizontal array of flags.

-- If the flag is displayed on its side, the blue field should be to the left.

--The flag should be raised in the morning at a residence or business and taken down at night. The only exception to the flag being out at night is if itÕs illuminated.

--Flags can be repaired. However, if a flag is tattered, it can be removed and brought to a local VFW hall to be properly disposed of.

Flag Day honors the Stars and Stripes, a symbol of the great American nation.