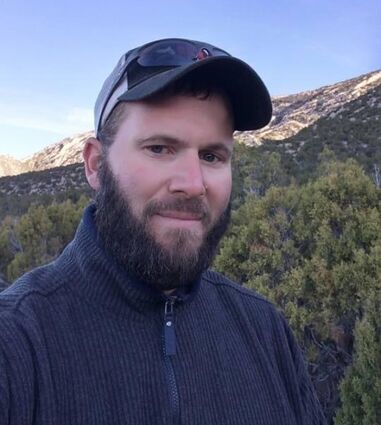 Clayton Douglas Brown quietly passed from this life on May 4th, 2022 in Athens, Ohio.

Clay was born in Andrews, Texas on October 29, 1979 to Stephen Jay Brown and Terisa Eads Brown. He was little brother to Kathy, Robin, Brittany, Jeff and Mindy, and big brother to Stephenie, Spencer and Cherity. Clay dearly loved his family and had a special relationship with each member of it. He was always a jokester, could find humor in almost any situation, and kept the family laughing with his stories and antics.

Clay attended school in New Mexico and Texas, graduating from Hereford High School in 1998. He was well liked and had many friends among the students and staff, excelled academically, and was active in football, basketball, and track, earning many awards. He graduated from the four year Seminary program of the Church of Jesus Christ of Latter-Day Saints with perfect attendance.

After graduation Clay was offered a scholarship to play football for West Point. He turned it down in order to fulfill a two-year mission for his church in Guatemala. He loved his mission and served faithfully, being able to teach the gospel to the beautiful, humble people who became family to him. When he came home from his mission, he left everything he owned with them, arriving back in the United States with the clothes he had on, worn out shoes, and a suitcase that was held together with duct tape. But he was happy and always longed to return to the simple life of Guatemala. During his mission he also had many companions who became lifelong friends and brothers.

Following his mission, Clay had plans to attend college in Utah, that was until he laid eyes on Beth Snyder at church and immediately fell in love. This began a whirlwind courtship and marriage in the Mt.Tipanogas, Utah Temple on July 28, 2001. The young couple settled in Powell, Wyoming where Clay attended Northwest College. They subsequently moved to Logan, Utah where he completed the Dairy Livestock program. Clay loved cows! During this time their first-born son, Clayton Christopher James Brown was born. CJ had a few medical problems and dairy work did not provide insurance, so this was when Clay decided to join the Army in order to have medical care for CJ. Clay also had a deep sense of patriotic duty and love for America, having come from a long line of military ancestors dating back to the Revolutionary War. He proudly continued this tradition and served two deployments to Iraq during the war.

While Clay was in the Army the little family was blessed with two more additions, Logan Tate and Salem Eryn. Beth was the perfect Army wife and truly kept the home fires burning as she lived on base and took care of their three young children during his deployment.

Clay served with many other soldiers who also became family to him. They held each other up and helped each other through some very difficult and dangerous times. They have continued to do so to this day, during the good and the bad, they have remained faithful friends and brothers. Clay was severely injured during his second tour of Iraq and subsequently medically discharged. He suffered greatly from the effects of the war, both physically and emotionally. Clay had a gentle heart and an empathetic spirit. The atrocities of war were hard on him. Many of these experiences he carried with him to his last day.

After Clays discharge from the Army the family settled in Powell, Wyoming. They were greatly blessed and happily surprised with the arrival of their fourth child, Jaxton Levi. Jax completed the family in every way. Clay and Beth eventually divorced, however they remained dear friends and dedicated co-parents to their children. Clay loved being a father and cherished his children and the time he spent with them. He was so proud of the amazing people they are and all of their accomplishments. They are and forever will be his legacy to this world.

Clay will be remembered by his friendly personality, his love and acceptance of everyone, his desire to serve others, his big heart, his bear hugs, his incredible sense of humor, wonderful laugh, and infectious smile.

He is survived by his parents of Worland, WY and his children of Powell WY, his brothers, Robin (Stacey) Brown of Lucedale MS, and Spencer (Samantha) Brown of Powell WY, and his sisters Kathy (Benny) Eubanks of Lucedale MS, Brittany (Nick) Baker of Worland WY, Stephenie Brown of Fraser CO, and Cherity (Micky) Garcia of Worland WY, and grandfather Clayton Brown of Snowflake, AZ, along with numerous beloved nieces, nephews, aunts, uncles, and cousins.

Funeral services will take place on Friday, June 10th, at 10:00 am at the Church of Jesus Christ of Latter-Day Saints, 527 West 7th Street chapel in Powell WY, followed by full military honors at the Crown Hill Cemetery.

Memorials may be sent to Clay's children in care of Thompson funeral home or to the Tunnel to Towers Foundation.