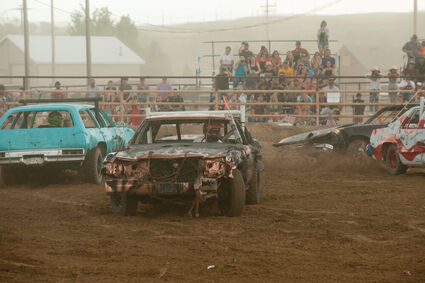 NORTHERN WYOMING NEWS/ Alex Kuhn Justin Howe keeps it moving during his heat at the Worland Demolition Derby put on by Stars and Pipes at the Washakie County Fairground on June 11 in Worland.

WORLAND – The Worland Demolition Derby, which was put on by Stars and Pipes Demolition Derby, a Thermopolis company promoting and organizing derbies, had 18 cars compete, nine Gut-n-Go's and 10 trucks on Saturday.

"The numbers were right at what we were expecting," Harvey said. "It's the biggest one Worland has had in a long time."

The Worland show kicked off a circuit across the state. The...