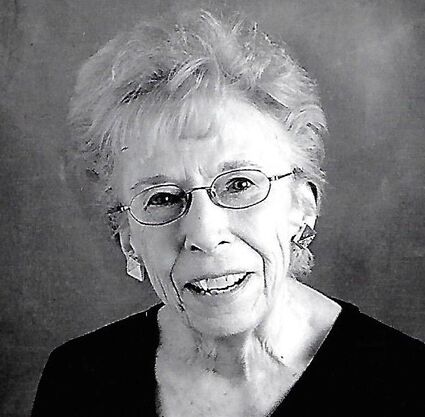 Elizabeth Ann (Betty) Witzeling passed away peacefully on June 10, 2022, surrounded by her family.

Born Nov. 22, 1925, to Hazel and Lawrence Minch in Plymouth, Wisconsin, Betty moved at a young age to Madison, Wisconsin, with her mother. She spent childhood summers at her grandparents' farm where all sorts of shenanigans ensued. She and her cousin Ellen painted their aunt's chickens green, set a section of the apple orchard on fire, and Betty convinced her cousin to jump from the hayloft into a pile of manure while holding an umbrella.

Betty's mother introduced her to her future husband Ken, who was working at a pharmacy nearby while completing his pharmacy degree in Laramie, Wyoming. They were married in 1951 and soon moved to Worland, Wyoming, where Ken worked as a pharmacist. Betty worked at Stockgrowers State Bank and the Wyoming Gas Company, while raising their two sons, David and Todd. The young family made many lifelong friends in the 15 years they lived in Worland.

In 1967, the family moved to Powell, where they had the opportunity to buy Moyer Drug which they later renamed Skyline Drug, and quickly became active members of the community. Betty worked side by side with Ken in the drugstore, where she helped with bookkeeping, ordering inventory, and customer service for the 24 years that they owned the business.

Betty's primary focus in life was always her family. She was chauffeur and biggest cheerleader for all of Dave and Todd's school and sporting events, including baseball, football, track, downhill skiing and years of swim meets across the state.

Betty loved to fish the lakes and streams of Wyoming with the boys and usually rushed to catch the first fish. Many of her favorite memories are backpacking in the Beartooth and Bighorn Mountains with her family and grandkids. She continued the yearly treks until her mid-seventies.

Her many other passions included competitive bridge with her dear friends, tole painting, collecting antiques, and being a lifelong New York Yankees fan. She was a sharp dresser, bringing style and panache to any event she attended. She was a 50-year member of PEO, and active with the Powell Homesteader Museum, and Powell Fine Arts. Betty became a private pilot in 1963 and was a proud member of the Ninety-Nine's Women's Aviation Association.

Betty and Ken were avid world travelers, with memorable trips to almost every country in Europe. She especially enjoyed Ireland, Italy and Germany.

Her family will miss her happy disposition, laughter, creativity, amazing desserts, devotion to family and friends, and that mischievous twinkle in her eye.

A celebration of life will be held at 11 a.m. on Saturday, June 25, 2022, at Immanuel Lutheran Church, 675 Avenue D, in Powell. A reception and light lunch will follow at the church.

In lieu of flowers, please donate to the Powell Homesteader Museum or Powell Hospital Medical Foundation on her behalf.