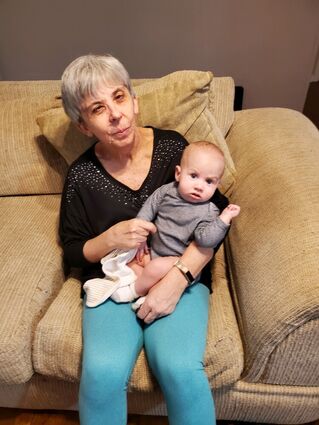 As a baby, Janet moved with her family to Ten Sleep, where her dad had been raised on the family ranch and her grandparents lived. As a toddler, Janet loved to walk outside with Grandpa around the house (several times) or the circular drive.

She attended Ten Sleep schools, graduating with the class of 1988. After graduation, she attended Central Wyoming College. Janet moved to Worland and began working, the last several years at Blair's Market.

Janet met the love of her life, Daniel "Dan" John Uttech online. She moved to Beach, North Dakota marrying Dan on July 2, 2011. After Dan's death, she returned to Worland to help care for her mother.

Janet had a beautiful smile when you teased her. She loved cats, country music, reading and throwing darts with her dad. She enjoyed spending time with her mom going to Bingo or volunteering at the Eagles.

Survivors include her sisters, Barbara Hughes of South Riding, Virginia and Sandra (Scott) Richard of Worland, niece, Amber (Jereme) Carne and their children, Avden and Ayla, and nephew, Zachary (Leeausha) Richard, and their son Stanley, several aunts, uncles and cousins and her cat, Dee.

Funeral services will be held 10 a.m., Saturday, July 9, 2022 at Ten Sleep Cemetery. Memorial donations may be made to American Legion Post #44 and sent to PO Box 524, Worland, WY 82401. Online condolences may be made at http://www.bryantfuneralhomeonline.com.