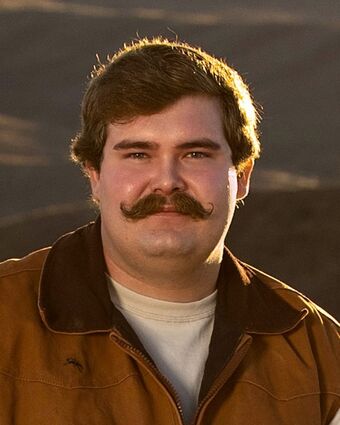 Shane Lloyd Frandson, 26, passed away unexpectedly in his home on August 20, 2022 in Worland, Wyoming.

He was born in Thermopolis, Wyoming to Fred Wayne and Lorie Lee (Dumpprope) Frandson on March 19, 1996. He was the youngest of two siblings, Vanessa and Logan.

As a youngster, Shane always made people laugh. He would give the goofiest smiles, poses, and sayings that would brighten up anyone's day. Shane loved to tag along with his older siblings, Vanessa and Logan. Shane spent much of his time outside building, riding his bike with his Pokémon card stuck in the spokes, and playing with the neighborhood kids. Shane was the absolute most accident-prone child there ever was and had many scars to prove it.

As Shane grew older, his giant smile turned into sly grins. His goofy sayings turned into the most hilarious and witty comebacks. He tried many different sports and activities and found his love of sports in football. Shane loved the great outdoors. He and his family spent many days on the mountains hunting, fishing, camping, and four-wheeling. Shane picked up on his dad's love of guns and loved to target practice in the badlands with his dad and brothers. Shane loved a good bonfire- the bigger the flame, the better the night. Shane's junior and senior year, he worked at DPS alongside his brother-in-law, Josh. Shane graduated high school from Worland High School in 2014. After high school, Shane attended Sheridan Community College for a brief time to pursue a Diesel Technology Degree. Shane then moved to Casper, Wyoming and worked at NOV in the repair department where his put his skills to the test. During his time in Casper, Shane added many new tattoos to his "collection." Eventually, Shane decided he wanted to return home to Worland to help work in the family business, Frandson Safety Inc. alongside his parents, Lorie and Fred Frandson.

Anyone who knew Shane knew that he loved his nieces and nephew with all his heart. His nieces and nephew adored their Uncle Shaner and they loved to razz each other back and forth. One of Shane's favorite places was on Fish Trap Lake in Minnesota. There he enjoyed fishing, spending time outside, and playing cards with his grandma. Shane was a collector, like his father. Shane's assembly of shoes, hats, funny T-shirts, pocketknives, knickknacks, and sentimental cards or drawings from his nieces-he kept it all in an organized fashion. Shane had quite the variety of hair and beard styles and was proud of his "ever-changing fashion to keep up with the times." Shane could quote verbatim just about any movie, viral video, or comedic TV show out there. His eclectic taste in music he would play on full blast left everyone wondering which type of song might come next on his playlist. Shane loved watching college ball, NBA, NHL, and NFL- he was always proud to support his Minnesota Vikings, Oklahoma Sooners, Wyoming Cowboys, and many other random team jerseys. You could always find Shane trying new drinks, random spices, the most bizarre, pickled foods, odd flavor of chips, you name it. Shane leaves this world too young and with gaping holes in the hearts of all the people who had the pleasure of knowing his love and quirkiness.

Shane was preceded in death by his father Fred Frandson; his grandparents, Elmer and Margaret Frandson, and uncle Darrell Mull.

He is survived by his mother, Lorie Frandson; sister, Vanessa (Josh) Keller and brother, Logan (Megan) Frandson all of Worland; nieces and nephew: Harper, Dayton, Kyson, and Willow; Grandparents, LeRoy and Dorie Dumpprope of Motley, Minnesota; as well as many family members from Minnesota and Wyoming.

Memorial services will be held 10:00 AM, Saturday, August 27, 2022 at the Grace Lutheran Church with Pastor Tim Trippel officiating. Memorial donations may be made to Washakie County Youth Alternatives and sent to PO Box 524 Worland, Wyoming 82401. Online condolences may be made to http://www.bryantfuneralhome