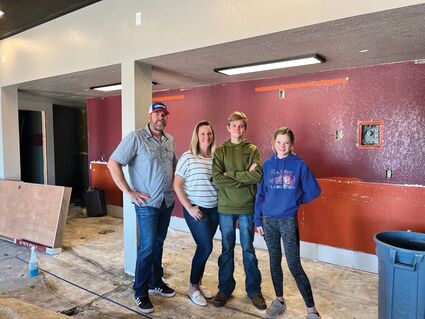 COURTESY The Dykstra family purchased Washakie Twin Cinemas and are working on renovations in hopes to re-open the theater by the end of October. Pictured in front of what will be the new lobby and concession area are Marc, Chasity, Ian and Breckyn. Not pictured is oldest son Aiden.

WORLAND - A Ten Sleep family looking to reduce drive time to see a movie and to provide something for the community is working to re-open the Washakie Twin Cinemas.

Chasity Dykstra said, "Our family is community minded and oriented. We wanted a way to give back to the community and know that theaters in a small town have a way of bringing people together."

Mark Dykstra added, "We had been looking for an opportunity for a while here in Ten Sleep and there just wasn't a whole lot in the way of opportunities. Chasity wondered what was going on with the theater since it had been closed for so long."

The theater closed in March 2020 during COVID-19 pandemic after orders by the governor and state health department ordered theaters, gym and personal service businesses closed. The theater did not re-open after the orders expired.

Marc said they searched online and found the theater for sale. "We called the owner and talked to him a little bit. We decided to go look at it one day. We found someone else looking at it so we waited for a while and that person didn't leave so we thought maybe someone else was going to buy it so we left."

That was in May, in July, Marc called the real estate agent to see if it was sold and found out the theater was still on the market.

"It was in really rough shape but we just felt like it was a good opportunity, something to do in the community and something for the kids to do. And we didn't want to keep driving two hours to watch a movie," Marc Dykstra said.

He said it appeared that in 2020 when ordered to close the "doors were locked and no one ever came back." There was popcorn in the popcorn maker, cheese in the warmer and "rodents had their fill of popcorn."

Chasity said they have purchased a new popcorn popper and other appliances for the concession area.

Marc said the roof leaked, which resulted in some ceiling tiles and insulation falling into the theaters.

"We have gutted it pretty much, the front of the building is basically gutted including bathroom, lobby, concession area. We are fixing the roof, air conditioner, heater and painting.

He said the seating is in good condition just need a good cleaning. "They are pretty comfortable, we will do some rearranging so people can see a little better," Marc said.

The projectors are in good shape just in need of maintenance. He said one needs a new server and one amplifier needs replaced. The parts have been ordered.

The Dykstras are doing most of the renovation work on their own. They have some painting contractors and friends that are helping. They said they have been very fortunate to have other businesses in town that want to help. Marc Dykstra said one company has donated labor and material at cost to do all the flooring, another has donated paint, and a beverage company has also been helping.

They said they are trying to get as many businesses to support the project, not necessarily financially but in-kind support.

Chasity Dykstra said, "The community is super excited. They have been coming to us asking 'How can we help?' 'What do you need?' It's been really kind of crazy with the amount of support from the businesses."

Marc added, "We're really excited about the community part of it, that's really the motivation. So it's been really exciting for these other businesses to come alongside us and support us in different ways."

The Dykstras said they plan on having the theater open Friday through Sunday and one day during the week.

"We're not sure the demand is going to be there for seven days a week. We'll play that by ear," Marc Dykstra said.

He said there is interest from the Washakie Museum utilizing the theater to show movies or documentaries related to their programs and exhibits.

"We want it to be open for community events," Marc Dykstra said.

He said they do plan to show new releases but also classics and would like to do some fun things over Christmas break and in the summer.

They plan to offer a mix of genres and will review the movies before showing them.

"We're probably not going to play the "trash" that is really graphic or untasteful; we'll keep it a little more family friendly," Marc said. Chasity added, "That does not mean it's going to be all Disney. We're just going to be cautious."

Operating a movie theater is new for them with Chasity a teacher at Ten Sleep School and Marc has a marketing firm and has been an entrepreneur since 1993. They also have a vacation rental and other rental units.

The family moved to Ten Sleep just over two years ago. Chasity grew up in Thermoplis going to movies at the Ritz Theater. "We have spent a lot of time over the years visiting family in Ten Sleep and Worland, and our kids spent many afternoons with their grandma at the Worland theater before it closed. We are very happy to be home."

The family includes their oldest son Aiden, who is attending a college prep school in Virginia, Ian and Breckyn.

They have hired one former Washakie Twin Cinema employee to provide some experience. The family rounds out the other staff who will be working.

The four of us will be working there with one employee for now, I'm sure we will be adding more employees as we get busier or be open more days," Marc Dykstra said.

When is the opening? "We're saying fall. I am hopeful for the end of October. All things are pointing to that being a possibility at this point, barring any kind of last minute supply issues," Marc Dykstra said.

He added, "Ultimately our goal is that it does well, and we can do other things on that property. It is a pretty good-sized lot. Hopefully it makes a difference in the community, maybe even brings in another restaurant or maybe restaurants will want to be open later.

"We are looking to do as much as we can with other businesses to support them too." He said perhaps they can partner with a business that provides a discount if people bring in their movie ticket.

He said businesses could also sponsor popcorn for the first 25 or so customers at the theater.