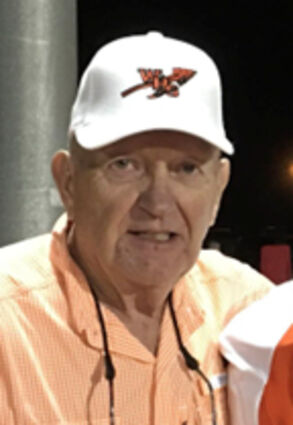 Rudy Sanford, 81 of Worland passed away October 29, 2022 surrounded by family. Rudy was born March 29, 1941 in Jackson, Wyoming to Charles and Selma Sanford. He was the fifth of five children, and the only boy.

Rudy spent his childhood in Jackson exploring with friends, hunting and fishing, and skiing on Snow King Mountain. He loved fishing with friends on Flat Creek, climbing and exploring the mountains, and riding his motorcycle to the Moose Head Ranch near Moran. The Moose Head Ranch was owned by his aunt and uncle, Eva and Fred Topping. Rudy routinely explored the area around the Moose Head, particularly the Spread Creek Drainage and Shadow Mountain on his horse Coalie. Rudy particularly enjoyed the time he spent with his maternal grandfather, Rudy Harold.

After graduating from Jackson-Wilson High School in 1959, Rudy attended the University of Wyoming, where he graduated in 1964 with a degree in secondary math education and a minor in industrial arts education.

Rudy's first teaching job was in LaGrange, Wyoming in the fall of 1964. LaGrange is also where Rudy was introduced to coaching as a part of his professional journey. He first was a volunteer assistant basketball coach for Ron Schliske, eventually becoming the head coach for cross country, basketball and track. While at LaGrange, Rudy guided his basketball team to the 1969 Wyoming Class C state basketball championship, as well as guided the Longhorns to the 1968 and 1969 Wyoming Class C state track championships.

While in LaGrange, Rudy met the love of his life Sharon Dougherty in 1965. Rudy and Sharon were married in Cheyenne, Wyoming on December 18, 1966. Their first son Kelly arrived in August of 1968. In 1970, the family moved to Newcastle, Wyoming where Rudy had accepted another teaching and coaching position. While in Newcastle, their second son Wade was born in September of 1971.

In the summer of 1977, Rudy moved the family back to Jackson where they would remain until he and Sharon moved to Worland in the spring of 2021. While in Jackson, Rudy taught math at Jackson Junior High School and Jackson Hole High School, also coaching a variety of sports including boys and girls basketball, football, and track.

Rudy retired from teaching and coaching in Jackson in the spring of 2001. In his retirement years, Rudy worked as a carpenter, enjoyed horseback riding, hunting, boating and fishing on Jackson Lake and most of all following the activities of his four grandchildren.

Rudy was preceded in death by his father, Charles, mother Selma May, and sisters, Marjorie Budge, Dorothy Green, Hazel Staley, and Charlene Bressler.

A memorial service for Rudy will be held 4:00 PM, Friday November 11 at Zion Church.