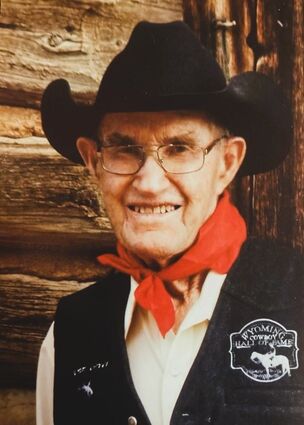 He was born in Worland, Wyoming on December 24, 1930, the youngest of Frank and Edna Lucile (Pyle) Greet's six children.

He attended grade school in the one room "Greet School" and went from a class of three to his first year of high school in Worland. He finished high school at the Mount Ellis Academy in Montana and attended Union College in Nebraska before returning to work on the family ranch south of Ten Sleep. He grew up with a strong work ethic, and as a child, some of his daily chores included filling big cans with water from the pumphouse and hauling them back to the house on his little wagon, as well as keeping the woodbox filled. At the Academy, he worked on their dairy farm and shoveled coal or sawdust in the furnace room, and he worked at a furniture factory while attending college.

John met Elsie Oneta Alexander at a dance in Worland, and while they were dating, he would drive to Worland on Wednesdays and Saturdays. Once, he got his car stuck in the mud and couldn't get it out, so he had to walk back home. His parents offered to loan him their car and he got that car stuck too, so he had to write Oneta a letter instead. They married in 1952 and remained married for 50 years until Oneta's death in 2002. They had three children: Cindy, Rhonda, and Vernon. He kept his love of old time country music and dancing his entire life, and played the guitar, harmonica, and accordion by ear.

A dedicated stockman, John spent many hours meticulously recording cattle records, to have information for improving the herd. Although the Greet herd began with Herefords, John eventually switched to Angus to develop quality genetics. He was pleased when the Greet Ranch was honored with the Pioneer Producer Award from Northern Livestock Video Auction in 2016 and when the Greet Ranch was awarded the Centennial Ranch status in 2009. He often spoke of how much hard work had been done on the ranch by so many people over the years. John was immensely happy that the Greet Ranch legacy will be continued by Vernon and Carol, their children and grandchildren.

John was actively involved with the Ten Sleep Rodeo for many years. Running the bucking string on the ranch was a joy he shared with his best friend, Ped Mills. He also told stories of chasing wild horses and hunting elk with his brother-in-law, Jerry Lewis. One year John won a horse race between Worland and Ten Sleep with his horses Brownie and Dick, but afterward swore he would never do that to a horse again. He was inducted into the Wyoming Cowboy Hall of Fame in 2016, and enjoyed sporting his fancy belt buckle and wool vest. John always took a great interest in weather and was a daily weather recorder for NOAA, who recently awarded him the Benjamin Franklin Award for 55 plus years of service. Although John enjoyed and appreciated these recognitions, he always said that his family was the most important and best thing in his life. He deeply loved his family and friends, and enjoyed being with them. We will miss him dearly.

Cremation has taken place and services will be held 10:30 am, Thursday December 1, 2022 at the Ten Sleep United Methodist Church with Pastor Chuck Powell officiating. Inurnment will follow at the Ten Sleep cemetery. Memorial donations are encouraged to be sent to a charity of your choice. Online condolences may be made at http://www.bryant