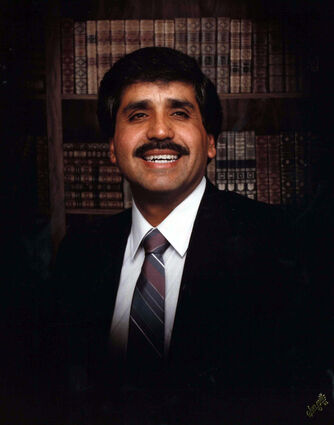 Lawrence Alfred Alvarado, "Junior", 77, was ushered into heaven on November 16 with his family right by his side. He left this world comforted and loved with angels ready to receive his spirit. This was a fitting conclusion to the life of a man who deeply loved Jesus Christ, his parents, his wife, Dolores, his children, and grandchildren. These relationships with God and his family defined the meaning of his existence.

Born in Worland, Wyoming on October 20, 1945, Larry was the oldest of 7 children born to Lawrence and Margaret Alvarado. The many special memories he made with his siblings – Helen, Bertha, David, Tony, Esther, and Sylvia in this small town and its tight knit group of Mexican American families continued to bring him back his entire life. To him, Worland represented the best of community. Once there he never passed up an opportunity to indulge in his favorite Mexican foods, and every aunt was happy to have fresh tortillas ready for him.

He was never afraid of a hard day of work, and this work ethic was one of the most important lessons he taught his family. Larry's most fulfilling years were spent being a provider. His giving nature and his live for today attitude was exemplary, but it ensured that he never had much in the way of earthly possessions. This never seemed to bother him, and he wasn't known to worry too much about tomorrow.

The things in life that he valued most, were not bought with money. He viewed being a father to "little" Larry and Tony as his life's best work. His time as a father to Donna, Terrie, Rena, Sandi and Jimmy was sometimes turbulent, but they all knew they were loved. As an older man he shined in the role of grandfather and relished being called "Poppy". Members of this inner circle would be defended by him at all costs – even if he knew they were wrong.

He will be remembered as the Zorro prankster who sneakily inked "Z's" on the foreheads of those who fell asleep at family events. His persistent razing and joking with his family were his way of showing love. He was known to gift 3 legged ceramic pigs and birthday card envelopes filled with pennies instead of twenties.

Always the individual, his interests and activities were eclectic. As a collector he kept cherished stamp and coin collections that are now curated by his grandkids. Later in life at his rest home, much to the mild embarrassment and smiles of his family, he dutifully collected and saved every leftover napkin, salt, pepper, and ketchup packet. He preferred to carry his belongings in grocery sacks rather than suitcases. He loved Elvis, strawberry shakes, and t-shirts from his family's vacations.

One thing is certain, the crazy stories from his life will continue to surface as the years go and his family is all ears.

A Memorial Service in his honor will be held Saturday, November 26, at 4 P.M., at Dokken-Nelson Funeral Home in Bozeman, Montana. A reception will follow at the same location.