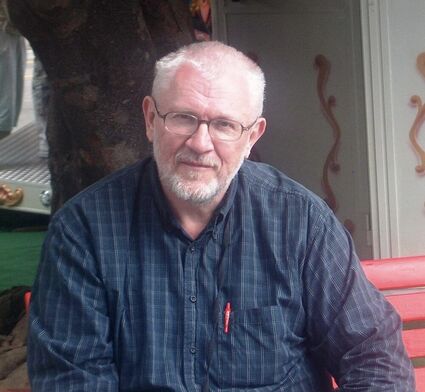 Kevin always wanted his obituary to start this way; a macabre decree in the first person from beyond the ether. Sadly, this is now true. As Kevin would remark (as a nod to Vonnegut), "So it goes."

Kevin Jensen Tonkovich was born 20 March 1953 to Vincent and Ila (Jensen) Tonkovich in Basin, WY. Shortly after his birth the family moved to Worland, where Vince worked as a pressman for the Northern Wyoming Daily News. Kevin attended school in Worland, and after graduating from WHS, enrolled at Brigham Young University, receiving a BA in German, with a minor in psychology. He served an LDS mission in Austria and upon his return, he married Pamela Morrison, whom he had met as a freshman at BYU. The couple then moved to Eugene, OR, where Kevin earned his MA in German at the University of Oregon. Shortly thereafter, he was hired to teach high school German in Eagle River, WI, where the family lived from 1980-1984, and then returned to Worland. Along the way, four daughters joined the Tonkovich family: Kate, Megan, Annie, and Emily.

Kevin taught German and psychology at Worland High School for more than 30 years. He coached WHS's speech and debate team for almost as long, and accompanied students to state and national tournaments. Kevin's students had opportunities to travel with him to Europe; for most it was their first time out of the country. Kevin held the radical belief that learning should be fun: In class, students memorized useful German phrases about bananas, sang songs about prepositions, and made crepes, muesli, and marzipan pigs for good luck in the New Year. They performed skits, made music videos, and constructed large-scale posters. A common remark is that Herr T was everyone's "lieblings Lehrer" (favorite teacher). After school, his students found a safe space in his classroom to hang out and discuss philosophy, religion, and the Eurovision song contest.

Kevin was notorious for the oddball collection of neckties he wore in compliance with/protest against the school's faculty dress code. He loved Red Dwarf, wearing Crocs of every color, playing board/strategy games ("Wie findest du Schach?") with students and family, and MTV, back when it actually played music videos. Summers were spent volunteering for the Wyoming Humanities Council and surveying stretches of badlands for Frontier Archaeology. He was a mentor and friend to hundreds of people during his career as an educator, and his humor, sincerity, sarcasm and directness were unmatched.

Kevin was a living reminder that organ donation saves and extends lives. In 2000, he was diagnosed with chronic liver disease and urgently needed a transplant. The town of Worland rallied for Kevin and held fundraisers and bake sales to help offset the cost of his medical expenses, and he was flown in Worland's Pepsi jet to Salt Lake City for his surgery at LDS Hospital. His new liver, which was provided via organ donation, gave Kevin almost 23 more years of life. But, in 2003, the roof caved in: Pam died of stage four uterine cancer at the young age of 49, leaving a permanent void.

Kevin retired from teaching at WHS in 2017. He continued to be involved with the school's debate program, and traveled widely to visit family and old friends until 2019, when he suffered a serious injury as the result of a fall. He moved to Salt Lake City, where he received ongoing treatment for a panoply of health problems. Nevertheless, he and his partner, Arlene White, enjoyed frequent outings around SLC: to Eccles Theater and Temple Square, and most recently, the aquarium with Kevin's grandchildren.

In the end, no one had interstitial lung disease (ILD) on their Bingo cards for Kevin, which was not treatable in his case. He succumbed to his medical complexities on 12 December 2022. His family would like to thank the Intensive Care Unit staff and Internal Medicine specialists at the University of Utah Hospital for caring for Kevin. And many heartfelt thanks to Arlene, his partner and friend, who was by his side until he departed.

In lieu of flowers, please consider a donation in Kevin's name to the Wyoming Humanities Council at https://www.thinkwy.org/donate or to the Worland High School Speech/Debate team. Donations for the team can be sent to:

His family is planning a celebration of life in his honor this coming summer, in Worland, WY, AKA "Worlando Beach." Details will be shared once they are finalized. Until then, "So geht's." Gute Reise, Herr T! Wir lieben dich immer.