Five Warriors qualify for state in first week of swimming 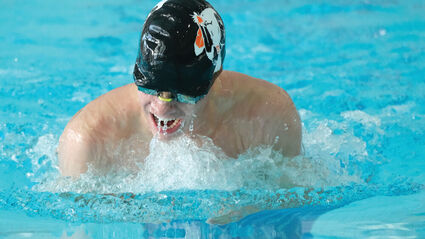 Warrior Wyatt Whitlock sprints ahead in the breaststroke during the Cody Pentathlon on Dec. 10 in Cody.

WORLAND - Starting their season on an excellent note, five Worland Warrior swimmers qualified for the 3A State meet in February during the first weekend of the season.

Swimming at the Powell quad on Dec. 9 and the Cody Pentathlon on Dec. 10, Warriors Trae Bennett, Walker Cooper, Canton Green, Gage Stanek and Wyatt Whitlock punched their ticket to state.