Capitol turns from near ruin to a gem 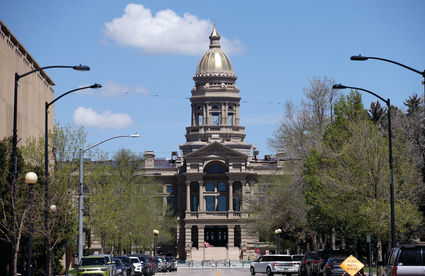 After more than four years of extensive renovation and improvements, Wyoming's Capitol is to open for business on Wednesday, Statehood Day. Improvements at the Capitol were just part of a $300 million project that saw refurbishment of the entire "Capitol Complex" in Cheyenne.

CHEYENNE – When the Wyoming State Capitol reopens to the public Wednesday after more than four years of extensive renovations and improvements, it might be hard for people to truly appreciate just how far the building has come.

It's good to keep in mind that back in the 1990s, maintenance crews were having to work around crumbling concrete, disintegrating pipes and wires that predated World War II hanging loose in the wall.

Former state lawmaker Jayne Mockler of Cheyenne said when she entered the Legislature in 1992, she was put on a committee that worked on such things as improvements around the Capitol. When lawmakers wanted to do something like change the carpets or seats in the gallery, Mockler said she'd be pulled aside by workers and shown where the improvements really needed to go.

"They'd said if you're going to fix anything, we should fix the plumbing or the concrete, because the chairs are just sitting in sand, or the wires were just hanging loose," Mockler said. "The building was actually falling apart."

After decades of ignored maintenance and wear and tear, the problem became too much to ignore. It was either work on a plan to completely repair the Capitol or be prepared to lose it for good.

Mockler led the charge for the state to start putting away millions of dollars to help fund what was estimated to be about a $150 million project. She was shortly joined by now-former legislators Tony Ross of Cheyenne and Phil Nicholas of Laramie, and throughout the early 2000s, the Legislature began to stash away budget surpluses for the project.

The total project cost topped $300 million, but that included a new utility plant for the Capitol complex, rebuilding the east and west wings of the Herschler Building, and rent for the Legislature and other state officials to move out of their home for four years. When the cost of just the Capitol is pulled out, it was close to the amount estimated back in the 2000s.

Mockler said one of the things she hopes is taken away from this project is the need for investment into maintaining not only the Capitol, but state buildings in general.

"You're either maintaining it or you're buying a new building every 40 or 50 years," Mockler said. "Through these 20 years, we're reaching a point where we realize these buildings are assets. I hope we're a little smarter about maintaining them moving forward."

For those who've been involved since the beginning, this project was not just about saving the state's Capitol. It was about saving vital pieces of Wyoming's history.

Throughout the construction and restoration, workers discovered historic items covered up and buried by years of paint, bricks and other changes that were made to create more space as the Legislature grew.

These items included hand-painted murals on vault doors, windows bricked up, opera posters covered in the ceiling, dishes from the turn of the century, the original trompe l'oeil paint on the walls from when the Capitol opened.

All of those pieces of history were rediscovered and restored during this process, said Ross, who is now the chairman of the Oversight Group on Capitol Rehabilitation and Restoration.

"Those are the things, when you see them and how they were covered up, you wonder what were they thinking," Ross said. "If you don't understand where you came from, how can you move forward? Everything we've done has been done meticulously to ensure that the value of the Capitol is maintained.

Gov. Mark Gordon, who will be giving a speech as part of the celebration Wednesday, said the project has helped to save a vital piece of Wyoming's history for the people of the state and was a "wise investment."

"This project is for the people of Wyoming, and is about Wyoming's future, as well as her past," Gordon said. "The beauty of the Capitol summons instantaneous pride, and I believe it stands as the architectural symbol of the spirit of Wyoming's people. We needed to invest in critical infrastructure to save the building, to modernize it, and to do so without destroying its beauty or character."

It is fitting the Capitol will reopen in 2019, Mockler said. While the Legislature had originally aimed for 2017 to celebrate the building's construction, it seems perfect that it should reopen on the 150th anniversary of Wyoming being the first government in the world to recognize the right of women to vote.

That document was signed in the original territorial assembly room, which shortly converted into the state Supreme Court. During the building's history, that room was split into two floors to make room, and one of the most important rooms in American history was buried in drywall.

"I cried when I saw the Supreme Court room. I said, 'Oh my God, they cut it into two to get more space,'" Mockler said. "But then you see it now, and it's an absolutely gorgeous room, you think this was worth all of it."