'The People's Building' is reopened for business 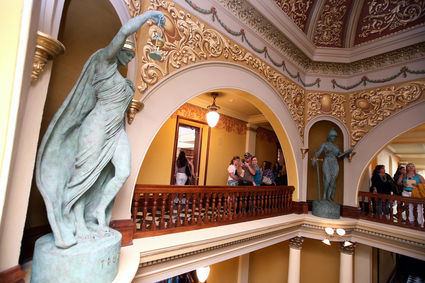 Visitors look at the new statues, which are allegorical sculptures that represent hope, courage, justice and truth, while touring the Capitol in Cheyenne for the first time during the grand reopening on Wednesday. Renovation and restoration of the 130-year-old Capitol, which is one of only 20 state capitols designated as a National Historic Landmark, took four years and more than $300 million. It was reopened with fanfare to the public on Statehood Day.

CHEYENNE – Before Wednesday's grand reopening of the newly renovated state Capitol, one would be forgiven if they didn't believe the four-year, multi-million-dollar project would result in something spectacular.

So often in life, things just don't live up to the hype. But given the reactions of the waves of people who walked through the building Wednesday, the years of planning and work paid off in an exceptional way.

"Initially, I wasn't sure (about the project). I thought $300 million was an awkward number for us to spend on the Capitol," said Cheyenne's Rick Fortney as he toured the building. "After looking at it, I feel like it was worth it."

The Capitol renovation itself, along with the building of the Capitol extension, cost about $138 million. With the remodel of the adjacent Herschler Building, which is still under construction, the creation of an entirely new central utility plant, and the cost to move the Legislature out of the Capitol during the project pushed the bill to about $317 million.

While Fortney and many others felt some sticker shock at that cost, upon seeing the finished project, many said they saw that money had been put to good use.

"It's nice to see what so much money can do," said Julie Bolin of Cheyenne. "This is just awesome. It's absolutely worthy of the state. I'm really proud."

Fortney and Bolin were just two of the thousands of people who spent time wandering about the completely renovated Capitol a ribbon-cutting ceremony led by state lawmakers. Essentially the entire Capitol was open to the public, along with the newly built committee rooms that are part of the underground Capitol extension wing.

In each corner of the Capitol, it seemed like someone was marveling at the extensive work that went into not only repairing the building, but bringing it back to its original glory.

Throughout the four-year project, workers kept discovering pieces of the original building buried behind bricks or coats of bland paint. And the workers labored meticulously to bring back those touches, whether it was removing a wall of bricks that blocked the House chamber's original massive window, or restoring turn-of-the-century art that adorned vaults throughout the lower floor of the Capitol.

"I'm just really glad they uncovered history. We've been hearing about false floors, false ceiling, balconies, hidden doorways that when they uncovered them were in perfect condition," said Jill Johansen, a Cheyenne resident who toured the Capitol. "I don't even know if I have words to describe it. It just looks majestic. It's stunning."

One of those restored pieces of history was the state Supreme Court chamber, which served originally as Territorial House Chamber. That was the site where Wyoming's founding fathers signed the document that formalized women's suffrage as part of the state Constitution.

That room and all its significance are the reason Wyoming's Capitol is only one of 20 state capitol buildings that have a National Historic Landmark designation. But before the project, it had been split into two floors as a way to gain more space for the growing Legislature.

The grandeur of the room was sacrificed in the name of office space.

"I think (that room) is important. It's one of the remarkable stories of Wyoming that women had the right to vote first," said Cheyenne's Carmel Wallace while touring the Capitol. "The grandeur of the space, after they removed the ceilings and the other walls, it really gives you a sense of the decision that was made at the time."

Toni Bell, who provided sign language interpretation for the opening ceremony, said she was taken aback by just how bright the Capitol had become. In the hallways, chambers and meeting rooms, natural light permeated almost every corner, a stark contrast to how the Capitol had previously looked before the project.

"It's more open, and the light is everywhere," Bell said. "It's amazing. It is beautiful here."

That beauty stands in stark contrast to the state of the Capitol before the project began four years ago. Those lifelong residents of Cheyenne who took tours of the Capitol as children, or who came to participate in their state government in action, told stories of a decrepit building that was crowded, unsafe and unappealing to the eye.

"One time I was here, and a small (light fixture) just fell off the ceiling," Wallace said. "And now, I put in my Christmas card I sent out to everyone last year they need to put the Wyoming Capitol building on their must-visit list."

The meaning behind "The People's Building"

Before the public finally got a chance to see the Capitol's newly restored glory, former and current lawmakers spoke at the steps of the building and thanked those that had made this massive project possible.

But beyond slapping each other on the back, and praising the hard work and determination of those who led the project, each leader took time to hammer home one overarching theme – the Capitol belonged to the people of Wyoming.

Gov. Mark Gordon recalled his first time walking into the state Capitol as an elected official, and said it had a lasting impact on him and everyone else who served the state.

Speaker of the House Steve Harshman, R-Casper, said he and the other members of the Legislature had been given the responsibility of saving and restoring the legacy left by the state's founding fathers.

"It was our turn. We didn't know that when we were born, right? But somehow providence put us here at this time to do this work. It had to be done, and we tried to do it right," Harshman said. "This is a gift from our founding fathers."

The project was started during the administration of former Gov. Matt Mead, and he said Wednesday that while the project faced criticism, the state's leaders understood it had to be done to save the state's heritage.

"We stand at the place where our founders, with courage, with determination, with grit built the very foundation of this building and the very foundation of our state," Mead said. "The renovation of the Capitol was a tribute to the vision and dedication for those who came before us that started with a territory and gave us a state on this very day in 1890."