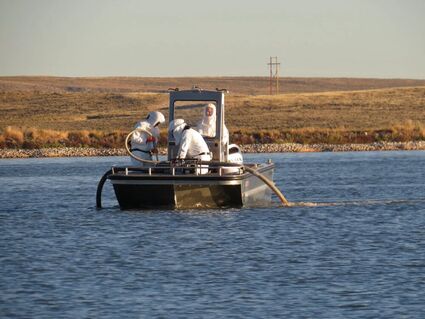 Biologists use a chemical called rotenone to kill fish in September in Saratoga Lake. The treatment kills all species with gills but was used to target illegally introduced yellow perch. Wyoming Game and Fish will stock rainbow, brown and tiger trout next summer.

In September, the Wyoming Game and Fish Department applied 14,000 pounds of a chemical called rotenone to kill anything with gills in Saratoga Lake.

It's a naturally derived chemical used commonly to control fish species around the globe. The good news is it only kills species with gills - so isn't harmful to humans, dogs, cows or other critters.

The bad news is it kills everything with gills.

September wasn't the first time fisheries biologists used rotenone in Saratoga Lake, and it likely won't be the last.

Native white suckers tend to overrun the man-made lake, eating everything in sight and stunting the trout fishery. But this time biologists weren't targeting white suckers. Game and Fish wanted to kill yellow perch - a nonnative game fish they believe was illegally introduced into the lake.

The nearest population of yellow perch in Wyoming's section of the North Platte is Glendo Reservoir, said Game and Fish's Laramie regional fisheries supervisor, Bobby Compton. "We reached out to Colorado Parks and Wildlife and confirmed there was nothing upstream." Most worrisome about yellow perch's presence in Saratoga Lake, he said, "was having this source clear up in the headwaters with their ability to colonize Seminoe Reservoir, and then Pathfinder and Alcova, plus, at times, perch can do well in rivers, too.

"It was a high-risk threat of spreading from Saratoga Lake," he said.

Department personnel have deemed the project, which cost nearly $140,000, a success, according to the agency. Next summer, biologists will restock the lake with brown, rainbow and tiger trout, hopefully returning Saratoga Lake to the productive cold-water fishery that it has been since Game and Fish started stocking decades ago.

Trout anglers welcome the news. The lake is popular for summer and winter fishing. But other anglers - ones who tend to focus more on cool-water species like yellow perch, walleye and crappie - wonder why trout are the focus.

"We keep dumping in resources to a nonnative species whereas walleye, which are related to [native] sauger, we're fighting," said Brian Woodward, vice president of the North Platte Walleyes Association and organizer of the Wyoming Walleye Stampede fishing tournaments. "We're trying to get a kid's cowlick to grow one way when it wants to grow the other."

These are the debates created in river systems like the North Platte where neither trout nor perch or walleye evolved. It begs questions like: When anglers seek nonnative species, and river systems have been fundamentally altered, what do fisheries biologists prioritize? And who decides what species stay and go?

"We're living with the decisions we made long ago," Compton of the WGF said.

For a river system like the North Platte, those decisions involved trout, which weren't native in this particular drainage. Before European settlers washed in waves over the nation, the North Platte River from Colorado to Nebraska was largely a cold and cool-water fishery. From Casper downstream, the river housed fish like sturgeon and catfish, goldeye and sauger. Upstream near Saratoga were white suckers, long-nosed suckers and minnows like creek chubs and brassy minnows.

But with settlers came dams, channeling and fish brought from home.

"You could imagine, the earliest management or stocking in the U.S. was basically the railroad came through and we started hauling fish from the East Coast," Compton said. "Brown trout and common carp were dumped over every bridge the railroad crossed because they wanted to stock fish they knew and wanted to catch."

By the 1940s and '50s, fisheries managers started to think more about what they stocked where. But at that point, it was often too late; some of the rivers had been forever altered. A series of dams and reservoirs morphed the North Platte River from slow and wide to colder and quicker. Stretches like Gray Reef above Casper and the section in and above Saratoga became known as world-class trout fisheries.

Water siphoned off of the North Platte into an irrigation canal fills Saratoga Lake, a medium-sized impoundment created in 1950 and teeming (at least until recently) with trout, white and long-nosed suckers, invasive brook stickleback, fathead minnows, a handful of walleye and "a good amount of yellow perch," Compton said.

A University of Wyoming graduate student first documented yellow perch in 2021 in the lake. An ice fishing derby that winter confirmed their presence.

Yellow perch tend to reproduce at incredible rates - females can lay up to 100,000 to 200,000 eggs at a time compared to a rainbow trout female, which might lay a couple thousand eggs. In a new habitat like Saratoga Lake, yellow perch would grow quickly and for a season or two exist at a nice catching size before eating themselves out of house and home and becoming stunted. Biologists know, because it happened in Healy Reservoir near Buffalo.

"Healy was managed as a trophy trout fishery. It had some of the fastest growth rates for trout, and those perch pretty much suppressed trout to a point where they couldn't grow or survive," Compton said. "[Managers] pretty much abandoned the trout fishery there."

Biologists also feared yellow perch catching a ride downstream and establishing themselves in other reservoirs, ponds and even the river. They worried about the impact not just on trout, but also on native species like brassy minnows and Iowa darters, which are both on the state's Species of Greatest Conservation Need list.

"Our management philosophy is [now] driven for sportfish and native nongame," Compton said. "We typically manage rivers as wild fisheries, so not a lot of stocking. We don't stock any river in the Laramie region.

"The native nongame fish assemblages are very important to us and that's why we don't want new animals in the system."

Not everyone prioritizes trout, even in a state that attracts trout anglers from around the world. And not everyone cares if yellow perch are big or little.

"I've talked to hundreds of people who fish Healy and love it because they can take their kids fishing," Woodward said.

He isn't a purist, but he also doesn't like to see fish killed. And he thinks Game and Fish should consider how it manages lakes and reservoirs for cold-water species when warmer or cooler-water ones do just fine.

Ultimately, what species belong in which area comes down to the culture of the place and what the system will support, said retired UW fisheries professor Wayne Hubert.

"Why do we prioritize walleye or smallmouth bass as somehow being a better fish than a common carp?" he asked. "Go to Europe and England and the prized sportfish is common carp. It depends on the value systems people carry."

When Hubert started his career 50 years ago, the focus was entirely on maximizing harvest for people to eat, he said. Now it's shifted, and it may well shift again with climate change.

As waters warm, trout will likely struggle in some places and warm-water species will thrive, Compton said.

"Right now, it can be a productive trout fishery and that's the management we have," he said. "But climate change is something we need to realize, and we're seeing it. Lakes are warming up. You used to be able to throw trout in any pond, lake or reservoir and they grew to great sizes. Now we have summer kills and algal blooms."

What that means for future management of Wyoming sportfishing is yet to be seen.